The corporate interests behind the Homestead migrant youth detention center 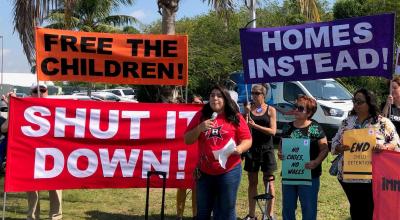 The Homestead immigrant youth detention facility has the capacity to hold 2,350 people. As of March 2019, Comprehensive Health Services has received nearly half a billion dollars from the U.S. Department of Health and Human Services (HHS) to run the detention center. The Homestead facility was previously used as a Job Corps training center. It has operated as an “influx care facility” site for unaccompanied undocumented minors from June 2016 to April 2017 and was reopened for that purpose again in March 2018. On December 19, 2018, Senator Jeff Merkley of Oregon and Representative Judy Chu introduced bicameral legislation that called for the closure of the Homestead facility. Neither has been put to the floor for a vote.

Defined by a Department of Health and Human Services (HHS) spokesperson as an “active temporary unaccompanied alien children program facility”, Homestead is intended to detain asylum-seeking youth temporarily until they are assigned to an adult sponsor during their asylum review process. The facility detains both youth that arrived at the border unaccompanied and youth forcibly separated from their family under the Trump Administration’s “Zero-Tolerance" policy. Homestead's designation as a temporary "influx” or “overflow” facility means that youth are sent there when other permanent youth detention facilities are at capacity.

The Homestead facility, like its predecessor at Tornillo, is located on federal land, exempting it from state licensing, child welfare, and state health regulations intended to protect children under government custody. Therefore, CHS is exempt from screening its employees through Florida’s child abuse and neglect background check system. However, the facility is still subject to federal regulations and all CHS staff undergo FBI background checks. Still, in June 2017 a former Homestead shelter worker was charged and found guilty of illicit sexual activity and exchanging explicit videos with minors at the shelter. In addition to exemption from state safety regulations, CHS is not required to provide formal schooling or any other “appropriate educational services” to the youth at Homestead, even though many are detained there for months. CHS claims to offer educational services, but teachers employed at Homestead are not mandated to hold any teaching credentials. In addition, to facilitate the rapid expansion of the Homestead facility, the Trump administration has loosened federal health care requirements regarding clinician-to-child ratios for children under government supervision. All of these exemptions and requirement rollbacks come at the expense of the physical and mental health of the detained asylum-seeking youth.

In 2016, the State of Florida gave a $600,000 tax break to CHS to encourage it to expand its facilities in Florida instead of Virginia. Florida Governor Rick Scott commented: “I am proud to announce that Comprehensive Health Services Inc. has chosen Florida over Virginia for their expansion (...) I look forward to seeing CHSi’s growth in Florida and we will continue to do all we can to cut taxes and reduce burdensome regulations so more businesses can succeed in our state.” Brevard County also contributed $190,000 in property tax breaks over ten years to encourage CHS to move to Florida.

In January 2019, CHS was issued licenses to operate three new permanent immigrant youth detention facilities in South Texas that could together detain over 600 children. On April 1, 2019, HHS announced plans to expand the detention capacity of the Homestead facility from 2,350 youth to 3,200 youth in mid-April 2019.

Comprehensive Health Services LLC (CHS) is a medical management company that contracts with governments and large businesses to provide various medical-related services ranging from on-site medical examinations to disaster preparedness. The company was founded in 1975, but entered the migrant detention business only in 2016, when it was contracted by HHS to run the Homestead detention center. This contract with HHS is a significant part of CHS’ business. The company attributed a 12.9 percent decrease in revenue between 2016 and 2017 to receiving smaller contracts for the Homestead facility.

In March 2018, private equity firm DC Capital Partners LLC bought CHS for $131 million. This was the same month that Homestead was reopened as an “influx care facility” for undocumented migrant youth, making CHS’ contract with HSS more lucrative. DC Capital Partners was founded in 2007 and is based in Alexandria, Virginia. It specializes in investing in companies that provide various services to the U.S. federal government and other large enterprises. Its other assets include companies such as:

Until 2012, DC Capital Partners also owned International Development Solutions (IDS), a mercenary company that trains the U.S. military as well as U.S. backed foreign armed groups across the world including in Afghanistan.

In August 2018, DC Capital Partners merged CHS with three other companies it had acquired into the Caliburn International Corporation. The other three companies that form Caliburn are:

Caliburn is heavily dependent on contracts from the U.S. federal government. In 2017, the combined revenue of Caliburn’s four subsidiaries amounted to $785 million, 88 percent of which came from contracts with federal agencies. CHS accounted for $187 million of revenue. In October 2018, DC Capital Partners attempted to make Caliburn a publicly traded company and registered for that purpose an Initial Public Offering (IPO) with the U.S. Securities and Exchange Commission. The IPO was to be underwritten by Jefferies Financial Group, Bank of America, and SunTrust Banks. However, reports of the controversies involving CHS’ Homestead operations and Sallyport’s Balad Air Force Base operations caused Caliburn to withdraw its application, remaining in the complete ownership of DC Partners.

Sallyport Global is one of the companies that form Caliburn International together with CHS. The company supports U.S. military and strategic objectives under a for-profit model. In 2014, Sallyport was contracted by the U.S. Department of Defense to operate the Balad Air Force Base in Iraq as a private military contractor. The company has received more than $1.75 billion for that contract since 2014, and it employs over 1,800 mercenaries from around the globe to run the base.

In a series of reports by the Daily Beast and the Government Accountability Project, current and former Sallyport employees described a chaotic base, plagued by corruption, misuse of funds, theft, prostitution, animal abuse, and rivaling mercenary factions. The reports detail nationalist cliques within Sallyport’s mercenary ranks, including a group of white South African mercenaries who circulated white supremacist, pro-Apartheid and anti-semitic media. Testimonies by former and current employees charged the group of white South African mercenaries with widespread racism and mistreatment of Iraqi soldiers and mercenaries of Color.

Further reporting by the Daily Beast details potential corruption and bribery by Sallyport to receive the Balad Air Force base contract through its ties with Kuwaiti company Afaq, which is connected to former Iraqi Prime Minister Nouri al-Maliki.

In January 2019, Sallyport’s contract to run the Balad Air Force Base was renewed until January 2020 for a reported $375 million.